What is good about the heritage of Potchefstroom?

In the space of slightly more than a month Potchefstroom received a double shock when two of its heritage buildings were lost to fire. It paints a very bleak picture of a city going to ruin, which is not the case. Unfortunately bad news gets much more coverage than good news. There is much to be said about neglected heritage properties, slowly going to ruin, but that is not the bigger picture. I therefore made my list of ten things that are good about the heritage of Potchefstroom.

The historic oak avenue of Potchefstroom is the most prominent icon of Potchefstroom. Stretching for 6,84 km from north at the entrance to the Dam resort to south at the entrance to the Agricultural College. The oak trees have been planted in 1910 and although many trees succumbed to a lack of water, due to numerous reasons, the trees still give a stately atmosphere to the avenue. Many residents deeply care for the trees, but some do not. It is my deepest wish that each property owner who has an historic oak tree standing on his sidewalk will take care of these silent giants who give so much pleasure to so many people. In 2017 Heritage Potchefstroom Erfenis launched a project to create a larger and better awareness of the plight of the trees. Many residents, businesses and institutions became involved. In some areas on the Bult the regeneration of the trees are visible after property owners have taken specific measures to ensure the continued health of the trees.  (See the Facebook page.) 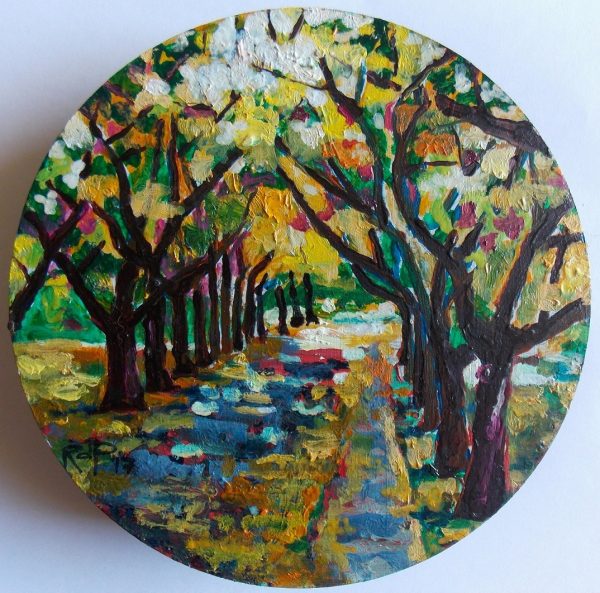 Ricky du Plessis painted this picture of the Oak Avenue. It was exhibited in 2017 during an exhibition by the Potchefstroom Art Society dedicated to the Oak Avenue.

The Mooi River and its fertile valley were known to the Voortrekkers – or emigrants as they called themselves – as far back as 1836. Legend has it that Potgieter, when visiting the area in 1836, stood by the waters of the river and leaned on a walking stick made from a thick branch of the “vaderlandswilg” (combretum erythrophyllum). The stick sank into the mud and somebody offered to help him to pull it out of the mud, but he decided to leave it there as a memento to his visit. Later this grew into a large tree which allegedly stood on the banks of the Mooi River near the bridge on the road to Schoemansdrif. AJ van der Walt, who wrote about this in “Vastrappers” described the river as “the Mooi River with its clear dancing waters, with reed-covered banks and green water”.

When Rev JD du Toit, later known as the poet Totius, encouraged the synod of the Reformed Church to relocate their Theological School from Burgersdorp to Potchefstroom, he specifically mentioned the “crystal clear waters” of the Mooi Rivier as one of the positive aspects of Potchefstroom.

Until the 1970’s there were many car wrecks and junk in the river and on its banks. These have been cleared away. The river still wanders its way through the town, the tranquil water giving joy to the people living on its banks or who has the privilege of spending time there.

In the Oewersig neighbourhood notice boards with photos of the birds, fish and reptiles which are in the area, have been erected on the banks of the river.

(Read this article of Prof Franci Greyling about a project she did on the Mooi River, “Mooirivier: weerspieëling en weerklank” (Mooi River: reflection and echo). 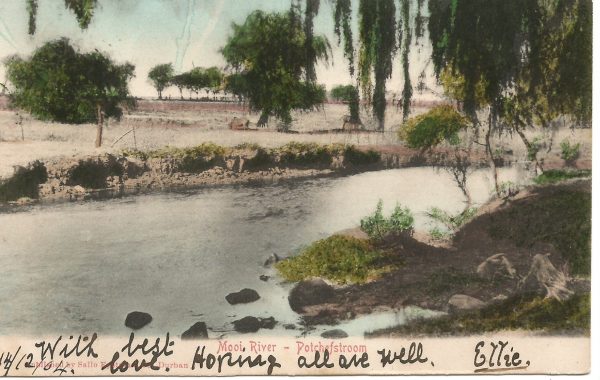 Although many signposts indicate the direction to Oudedorp, it is not town where a group of buildings indicate the existence of a place. There is nothing left of Oudedorp. But the general area of Oudedorp has a sense of place that is imbued with history. Such as the aptly named Anderland venue, which is on the farm of one of the early legends of Potchefstroom Piet “Bontperde” Bezuidenhout. A willow tree that has greatly surpassed the life expectancy of most other willows still feeds from the run-off stream of a fountain at Anderland. Close-by stands an unassuming building that keeps the secret to itself that it has served the first emigrants of this area as a coach house. (Have a look at the web site of Anderland.) 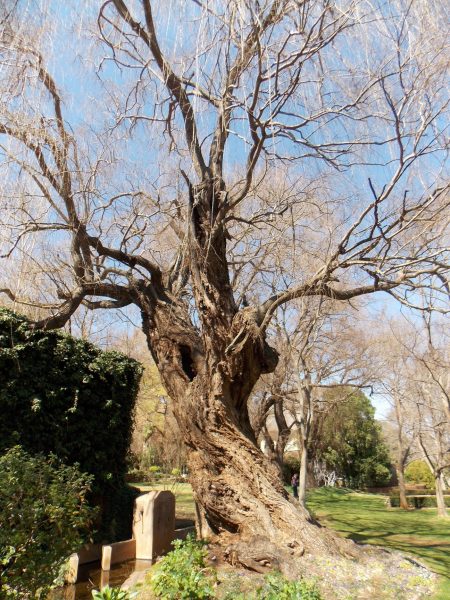 Although here stripped of its leaves during winter, this willow has been growing next to a fountain stream at Oudedorp for decades.

If you juxtapose the ruins of the recently lost heritage buildings against some of the historic churches in town, the contrast cannot be bigger. The Dutch Reformed Church, Potchefstroom, first built in 1895, burned down in 2007. A restoration project costing R7,4 million was launched and in May 2010 the restored church was officially inaugurated. This is a shining example of how a community can come together to save its heritage buildings. The project was funded by insurance, bequests and donations from diverse origins. This includes the mayor of Potchefstroom and the Rag Personality of the NWU Potchefstroom. This is a shining example of where there is a will, there is a way. 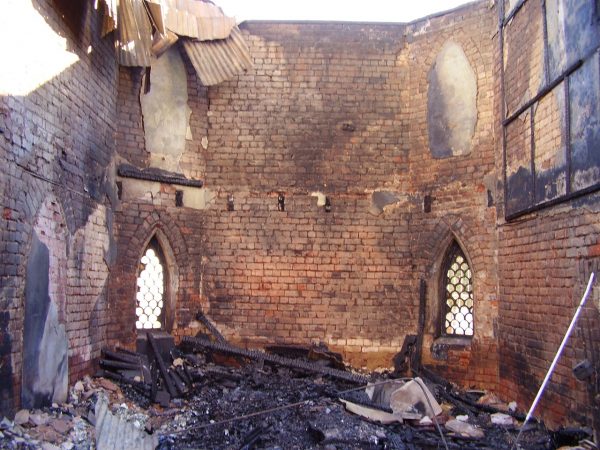 The destruction caused by the 2007 fire is clearly visible in this photo showing the interior of the Dutch Reformed Church Potchefstroom before it was cleaned up. Photo: Mione du Toit 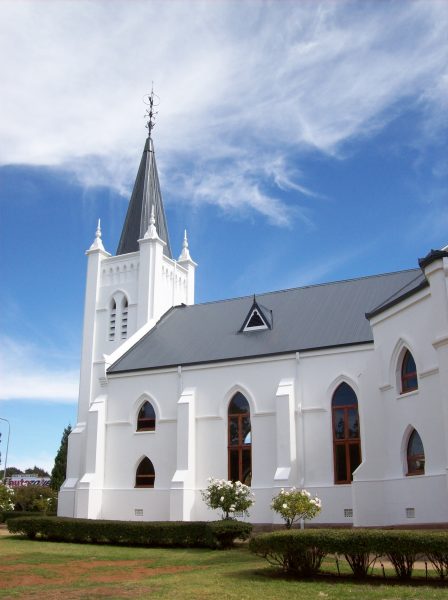 The Dutch Reformed Church, after completion of the restoration project in 2010.

The church of the Hervormde Kerk across from the Town Hall is the oldest church building in the city. The church has over many years kept an ongoing project of restoration. In 2016 the tower of the building was practically rebuilt. This is one of many congregations in town for whom their building is not only a roof over their head, but a heritage building to be cherished.

What could easily have been a huge eyesore and ruin has been transformed into one of the heritage sites in Potchefstroom that the city can truly be proud of. The Snowflake Building was built as Horsefall’s Mill in 1920 and kept the name until 1939 when the owner, Mr WH Horsefall passed away and the South African Milling Company acquired the mill. An advertisement for Snowflake Flour was placed on the building giving the building its name. Until 1996 it was used as a depot and in 1997 Mr Albert Bothma, the current owner, bought the building to house his beer brewery. Since 1998 art exhibitions are held in the building and the first of the very popular Snowflake Market took place in 2012. Since then a theatre, which can also be used as a wedding venue, was created in one of the buildings in the complex. (You can reach the Snowflake web site here.) 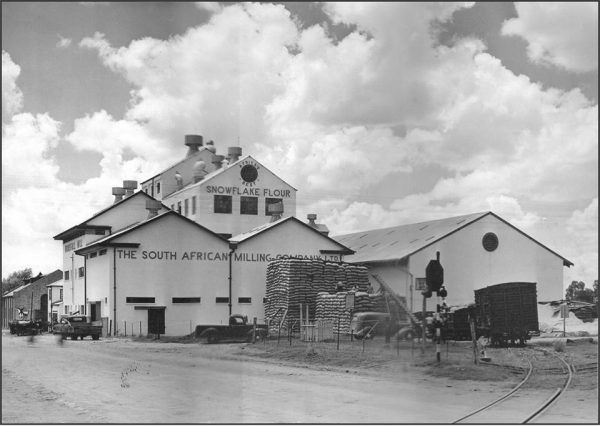 This is how the Snowflake building looked in the 1930’s. This former mill is now the venue for concerts, art exhibitions and weddings, one of the restoration success stories of Potchefstroom. Photo: Potchefstroom Museum

The Potchefstroom Herald, the local newspaper of Potchefstroom, was founded in 1908 and although it had to weather turbulent times, it has recorded the history of the town for 112 years. CV Bate, the founder, wrote in the first editorial “that we indeed may be a herald of an era of brightness, permanent progress and closer union”.

The Herald not only serves as the memory of Potchefstroom, but has also been its conscience, giving criticism where it is due and in many instances effecting change which benefitted the city.

The front page of the first Potchefstroom Herald, published on 1 May 1908.

Three buildings on the campus of the North-West University in Potchefstroom are declared Provincial Heritage Sites, which are the Main Building, the former Heimat Hostel and the old Physics Building. These are apart from the large number of buildings that has graced the campus for more than 50 years. Although functionality of these buildings are of key importance, this is achieved while taking the history into consideration.

Apart from the three house museums, the Totius House Museum, the President Pretorius Museum and the Goetz-Fleischack Museum, the town has a number of other museums. The largest of these is the museum and archives of the North-West University, situated in the library building. (More info on the web page of the Museum.) There are two other museums on the campus of the NWU: the museum of the Teachers Training College (POK) and the Geology Museum.

The museum of the Reformed Church is housed in the old Theological School building in Molen Street, next to the Totius House Museum.

All of these present an opportunity for history buffs to immerse themselves in the history of the city.

In the late 1970’s people all over the country started to look at old buildings with new eyes. The focus shifted from just tearing down old buildings to renovation, restoration and conservation. Soon Potchefstroom also caught on, especially after a branch of the Foundation Simon van der Stel was founded in 1982. In 1977 the Totius House Museum was opened and shortly afterwards restoration of the President Pretorius Museum and the Goetz-Fleischack Museum started. The residents of Potchefstroom were kept abreast with the progress of the restoration work and soon were inspired to restore their own homes. Many of the beautiful heritage houses in the city was first restored at this time. Many of these can be seen in Beyers Naudé, Kamp, Kock and Smit Streets, amongst others.

10. Enterprises that stood the test of time

Business concerns come and go, but there are a number which have been here for many decades. For anyone who lived in Potchefstroom for even a short period of time, there will be fond memories of the “hoefies” of Turkstra Bakery, a breakfast at the Akker or the “slap chips” of Rio Café (also jokingly referred to as “Tien Rand Café”), to name a few. Such businesses have become part of the ingrained character and heritage of Potchefstroom that survived the seasons like those old willows on the banks of the Mooi River. 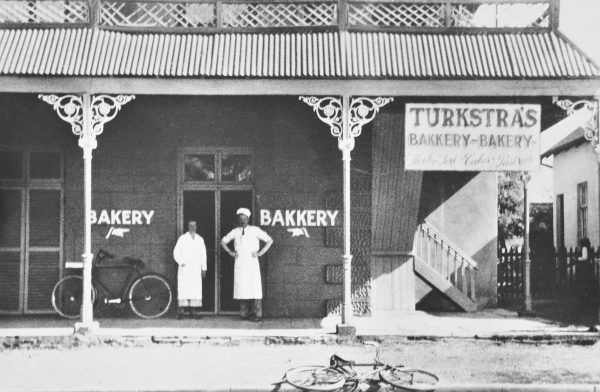 The first Turkstra bakery opened in Potchefstroom in 1935. The first shop was in Wolmarans Street, just west of the corner with Church Street (Walter Sisulu). Photo: Turkstra Bakery

Note: Many thanks to my husband, Hans, without whose help and insight, this would not have been possible. Also, unless otherwise mentioned, photos were taken by myself.