He never permanently lived in Potchefstroom, wasn’t even born here, but through most of his life FW de Klerk was intrinsically linked to Potchefstroom, especially with the Potchefstroom University for Christian Higher Education (PU for CHE). With his passing at the age of 85 on 11 November, it is fitting to have a closer look at his involvement with the University and its successor.

In 1985 I had the privilege to interview both FW de Klerk and his then wife, Marike, in Cape Town for the PUK-Skakel.

He then said: “There was never any doubt about it that I would go to the Puk. I come from a family that is so connected to the Puk, that we regarded it as automatic that a De Klerk should study at the Puk.”

His grandfather, Rev Willem Johannes de Klerk (1875-1943), was the first Registrar of the Potchefstroom University College (PUC). He was born in Burgersdorp on 23 October 1875, a mere six years after the Theological School of the Reformed Church was founded in the same town. Not surprisingly he studied at the Theological School. In Wonderdaad! Piet van der Schyff described him as “a spirited Afrikaner” whose sentiments had him imprisoned for high treason for four months in April 1900. He was released and labelled a “second class rebel” which meant that he could carry on with his theological studies. In September 1901 he was again taken into custody and banned to King William’s Town for four months.

He completed his studies in 1902 and became a minister in Heidelberg. In July 1911 he succeeded Dr JD du Toit (later known as the poet Totius) as third minister to the Reformed Church Potchefstroom. In 1919, when the Literary Department of the Theological School became the Potchefstroom University College, Rev Willem de Klerk was appointed first as temporary and from 1923 as permanent Registrar of the new fledgling PUC. Through much of his endeavours the PUC as well as the Potchefstroom Gimnasium came into being.

Shortly after his appointment both his wife and daughter Lettie (11) passed away after contracting the Spanish Flu. (See my article.) Mrs Aletta Johanna De Klerk (36) passed away on 21 August 1919 and Lettie a mere six days later on 27 August. After his shocking loss, he had eight other children to take care of on his own. 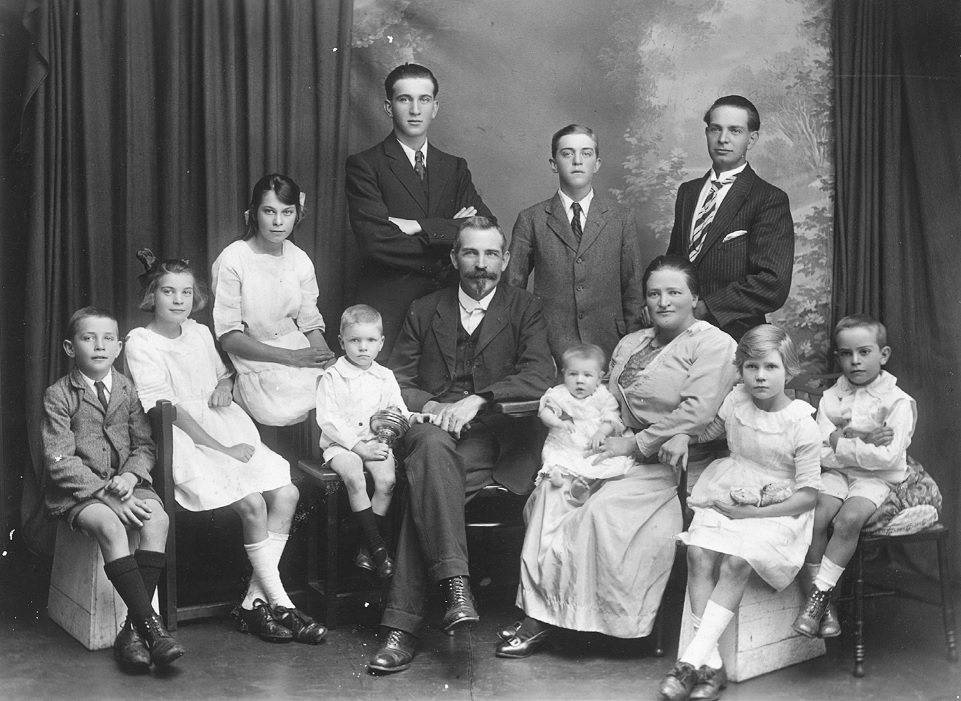 Rev WJ de Klerk, his third wife, Anna (Annie) Sophia Coetsee (widow van der Linde) whom he married on 16 August 1920 and their children. Johannes, who stands to the right at the back later became the father of FW de Klerk. Photo: Wikipedia

Senator Johannes (Jan) de Klerk, son of WJ de Klerk, received the second ever honorary doctorate degree in Law in 1960 from the PU for CHE. He was born on 22 June 1903 in Burgersdorp, grew up in Potchefstroom and attended the Preparatory School, a primary and secondary school attached to the Theological School of the Reformed Church. After the Preparatory School became the Potchefstroom Gimnasium, he matriculated there.

He then became a teacher and retired from the profession in 1945 as headmaster of the Primrose East Afrikaans Medium School.

He became a member of the Transvaal Provincial Council and the Executive Committee where he concentrated on Public Education. In 1954 he was elected as Member of Parliament for Kempton Park. In 1958 he was appointed as Senator of the Parliament of the Union of South Africa and served in the cabinet as Minister of Labour and National Health. In September 1958 he was appointed as Minister of Labour and Mining.

Prof HL Swanepoel, the then Dean of Arts, wrote about him in the programme of the graduation ceremony when he received the honorary doctorate degree: “In his long public career, friend and foe knew him as a leader, an organiser, as an approachable, affectionate, friendly and devoted man in deed and word.”

Minister De Klerk was inaugurated as Chancellor of the PU for CHE in February 1962.

In 1969 he was appointed as President of the Senate of the Republic of South African and in 1971 he acted as State President. Jan de Klerk passed away in January 1979. 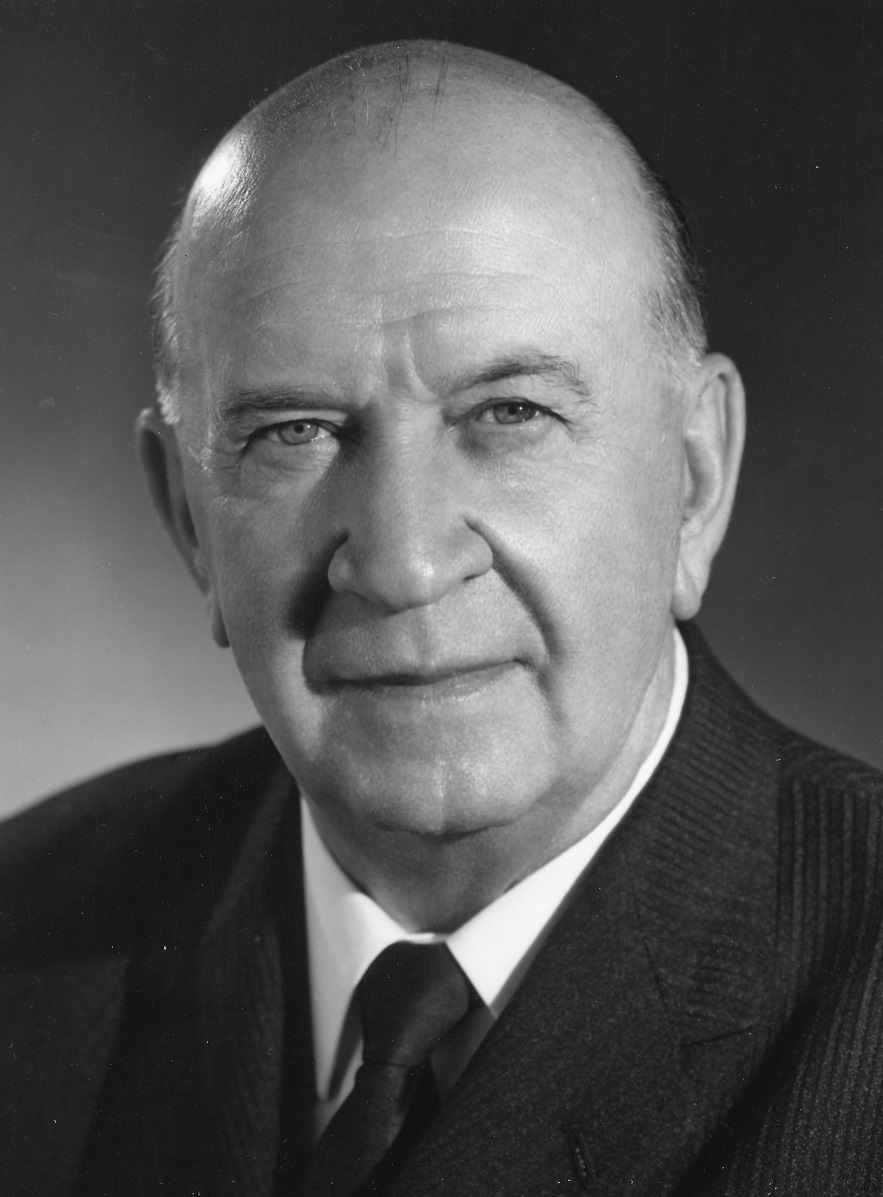 From PU student to State President

FW (Frederik Willem de Klerk is the alumnus of the PU for CHE that achieved the highest position in the country. He was State President of South Africa from 1989 to 1994. 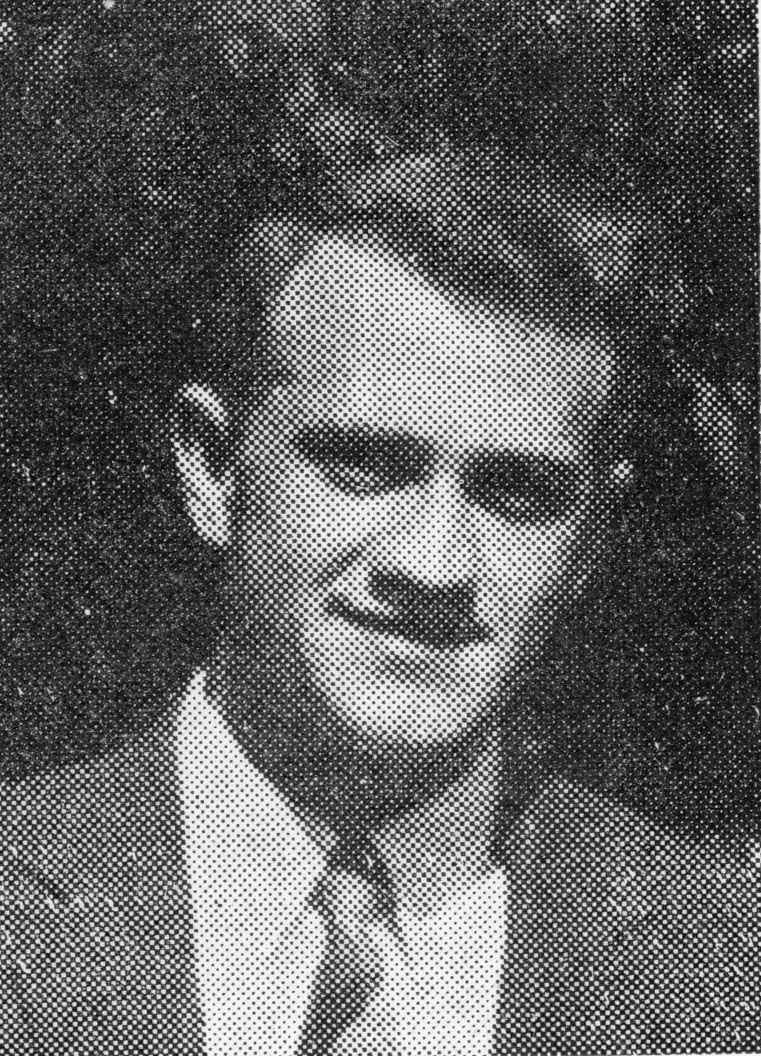 FW de Klerk when he was a student at the PU for CHE. Photo: NWU Records, Archives and Museum.

During the 1985 interview FW said: “I always wanted to become an advocate, not a ‘lying’ advocate but a political one.” 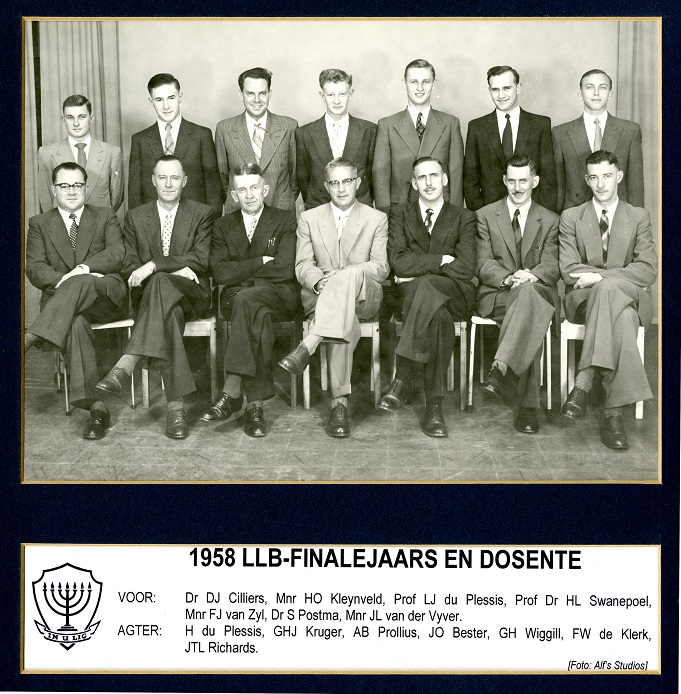 FW de Klerk stands second from right in this class photo of the LLB students of 1958. Photo: NWU Faculty of Law

By the time he became Chancellor academic processions were nothing new to him. FW told this anecdote in 1985:

For the official opening of the university in the year he was a first year student, 1954, red dressing gowns were found. Urged by the later Dr Jan Visser, then the chairman of the Student Council, the first years were dressed in this. When the academic procession entered the hall where the opening was held from one door, the first years all in the red dressing gowns, with FW leading, entered by another door. The Assistant Registrar was extremely upset and this and the audacity of the first years had the audience in stitches. 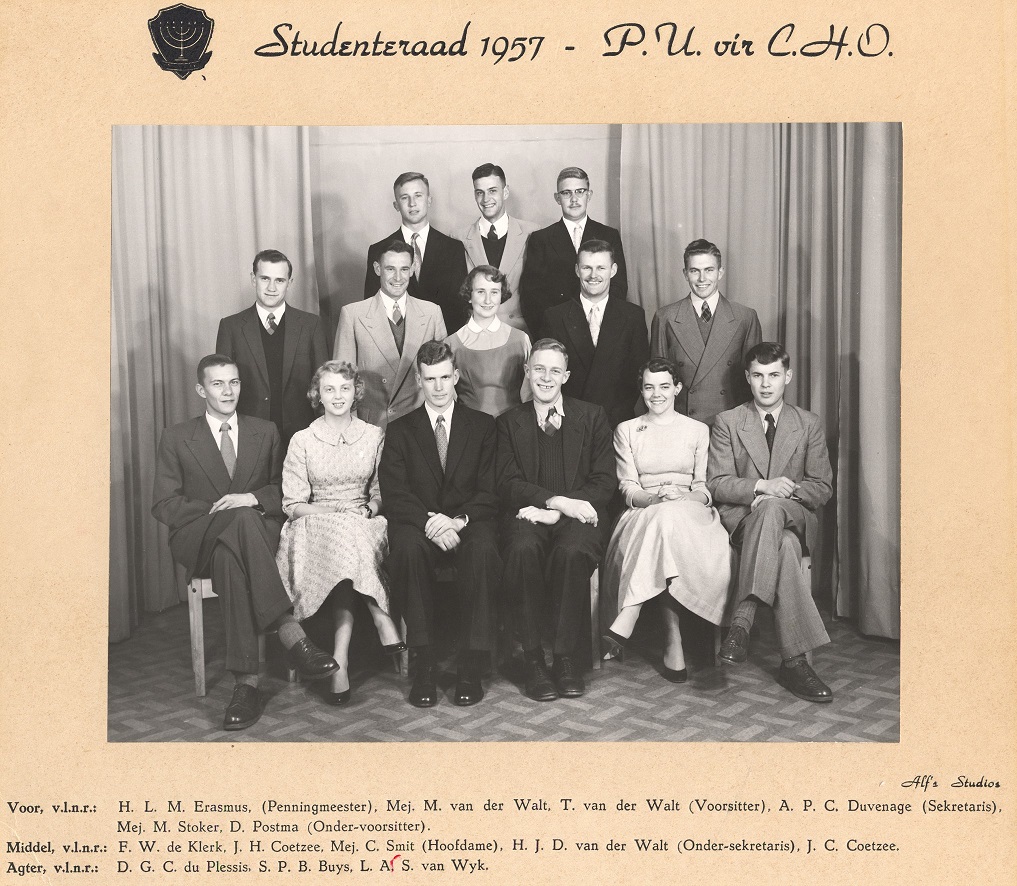 In this photo of the Student Council of the PU for CHE for 1957, FW de Klerk stands far left in the second row. The chairman this year was the later Rector of the PU for CHE, Tjaart van der Walt. Photo: NWU Records, Archives and Museum. 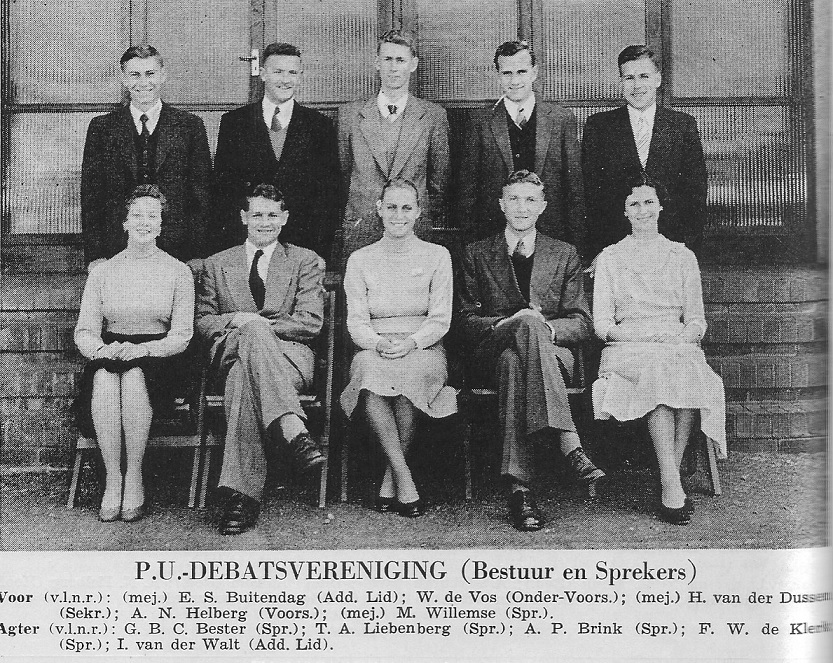 Both FW de Klerk (second from right at the back) and his future wife, then Marike Willemse (far right sitting) were speakers during the activities of the Debating Society in 1957. In the middle, next to FW, stands André Brink, who later found fame as a writer. The photo appeared in the student yearbook of the PU for CHE, Die Besembos.

It appeared that the relationship between FW and Marike became serious in his last year, 1958. In 1991 Ex Jure, a publication of the student society of the Law Faculty, published an article on Prof LJ du Plessis that noted that he apparently one day passed Marike on campus and said: “O, of course! You are the young lady that is interested in Mr De Klerk.” 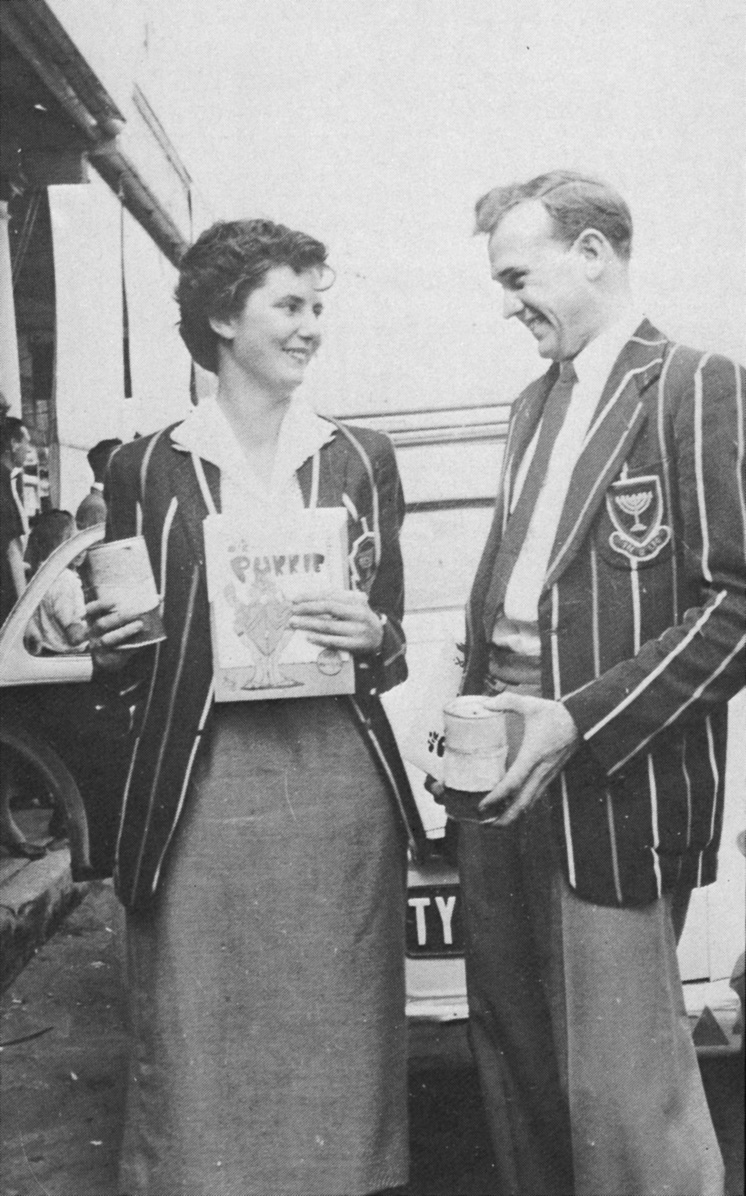 The couple got married and Marike said in 1985: “He earned £30 per month as an articled clerk at an attorney’s firm in Klerksdorp and then Pretoria. I, as a qualified women, earned £42 per month. The rent for our flat was £22 per month. We were poor, very poor and my father-in-law, then Minister Jan de Klerk, believed that you do not help a child who does the crazy thing to go and get married.”

The couple adopted three children. Their eldest son, Jan, followed in his mother’s footsteps and studied BComm at the PU. Their son, Willem, passed away from cancer in 2020.

The PU for CHE presented Mr FW de Klerk with a professorship in 1972 and the post as head of the department of Public Law in the Faculty of Law. He would have joined his only brother, Prof Wimpie de Klerk, who at time was already a professor at the PU for CHE. FW De Klerk then practised law in Vereeniging with the late Prof IG Vorster as his partner and the family had lived there for ten years. However, before he could formally take up his professorship, he was appointed as candidate for the National Party in the constituency of Vereeniging and was elected as a Member of Parliament in November 1972.

Marike said in 1985 that his election to Parliament was an act of Providence. According to her he actually wasn’t much of an academic, but loved having interaction with people.

In 1990 the LLD (honoris cause) was awarded to him. He also received honorary doctorate degrees from the Universities of Stellenbosch (D Phil), Bar-Ilan, Israel (LLD) and the National Chengchi University, Taiwan (D Phil). 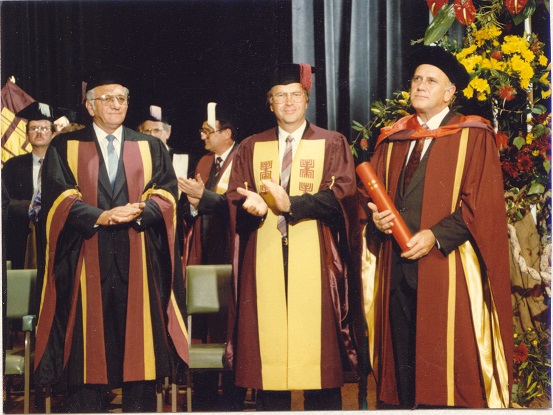 This photo was taken during the ceremony when FW de Klerk received the honorary LLD in 1990. With him is Prof Nic Swart, Vice-Rector and Prof Willem Scott, Registrar. Photo: NWU Records, Archives & Museum.

On 18 September 1991 he was unanimously appointed by the Council of the University as the seventh Chancellor of the Potchefstroom University for Christian Higher Education for a term of six years from 1 January 1992 to 31 December 1997.

FW de Klerk’s rise in politics is regarded as meteoric. Only five years after being elected to Parliament he became Minister of Post and Telecommunications, National Welfare and Pensions. He also served in various other portfolios including Sport and Recreation, Mining and National Education.

On 1 December 1986 he became leader of the Parliament and was elected as State President on 15 September 1989. The PU Choir sang at his inauguration as President.

In 1993 he received the Nobel Peace Prize with Nelson Mandela for their contribution to the peaceful ending of apartheid.

During his tenure as Chancellor the De Klerks often visited the campus. On one such occasion he was greeted by the President van Tarentaal* (aka Giep van Zyl) with the words: “Good afternoon President De Klerk, I know it is an enormous honour for you to meet me!”

During this occasion a stuffed guinea-fowl was presented to Mr De Klerk with the same pomp and circumstance as if it was a formal meeting of heads of state.

In 1996 FW de Klerk resigned as Deputy President in the Government of National Unity. The next year he resigned from the National Party and retired from politics and in 1998 he resigned as Chancellor. Wapad, the student newspaper wrote on 12 February 1998 that De Klerk said in his letter of resignation that circumstances surrounding him is contentious, which did not serve the interests of the University.

After starting an affair with the wife of one of his benefactors, Elida Georgiades, in 1994, FW and Marike de Klerk got divorced in 1996. He and Mrs Georgiades got married in 1998.

On 2 December 2001 Marike de Klerk was murdered by a security guard in the luxury complex where she lived in Bloubergstrand. In May 2003 her murderer received two life sentences.

In 2002 the Faculty of Law instituted a FW De Klerk Lecture Series.

In 2009 he donated his library and other memorabilia to the NWU (North-West University) Potchefstroom Campus and it was housed in a hall in the Ferdinand Postma Library named after him. 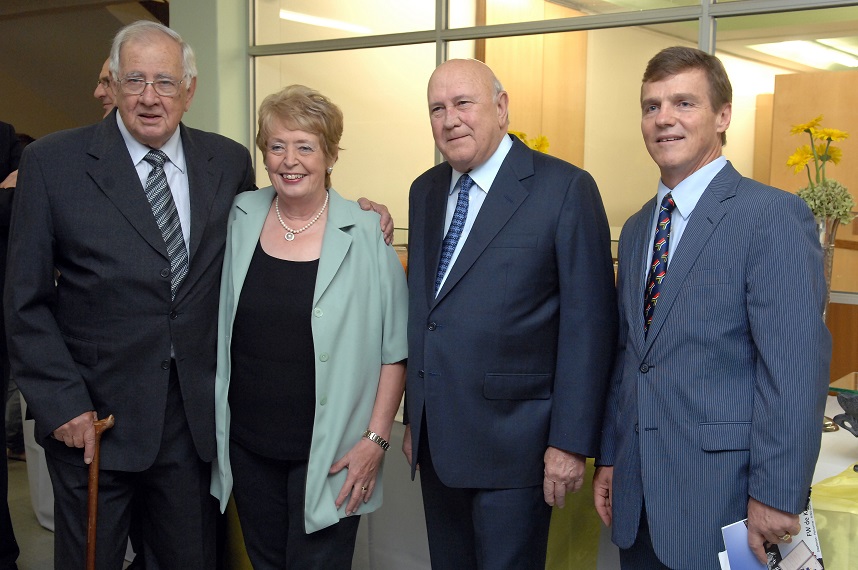 During the refurbishment of the Library from 2012 to 2018 the collection was handed to the FW de Klerk Foundation.

In its tenth year in 2014 the NWU included FW de Klerk in the top ten alumni of the University which received the first Alumni Awards. During this occasion the highly respected Life Achievement Award was also given to him. Other alumni which also received one of those first ten Alumni Awards were Dr Theuns Eloff, Prof TT Cloete and Judge Yvonne Mokgoro.

As pre-eminent alumnus of this University FW de Klerk might not have an equal. His involvement over the years stemmed from a deeply ingrained loyalty, something that he maintained over many decades.

*The Republic of Tarentaal was created somewhere in the 1970s by very creative students. A very tiny railway station about 10 km out of Potchefstroom on the road to Johannesburg, named Tarentaal (guinea fowl) became the seat of the “republic”. The over-the-top president was styled to take the mickey out of the overly pompous politicians of the time. The President and his entourage popped up at large gatherings on the campus, usually giving his nonsensical two cents about whatever is going on, usually causing quite a stir and providing some welcome comic relief. One of the longest-serving presidents of Tarentaal was Giep van Zyl, who even years after he graduated, visited the campus on certain occasions to reprise his role.