Old Grimbeekhuis – a gem in our midst

Set like a fine diamond in the setting of its verdant gardens, the Old Grimbeekhuis in Herman Street in Grimbeek Park, is a treasure in our midst. This is how it is described by a reviewer on social media.

The Old Grimbeekhuis is very near to my heart. In the early 1980s when we were still courting, my husband and I were driving around Potchefstroom and he said he wanted to show me something. We put-putted with his 125cc vintage motorcycle down a dusty country lane, just beyond Grimbeek Park and there stood this gem of a house!

The sight of the house just blew me away. It spoke of grandeur of a bygone era. It has a Victorian veranda with a curved galvanised iron roof, a rounded gable behind the veranda and a date, 1904, on the northern gable.

At the time the house was used as a storage facility for seeds and was overrun by mice! Due to the clayey condition of the soil, the east gable was completely detached and leaned away from the building. It was just a matter of time before it would fall over. 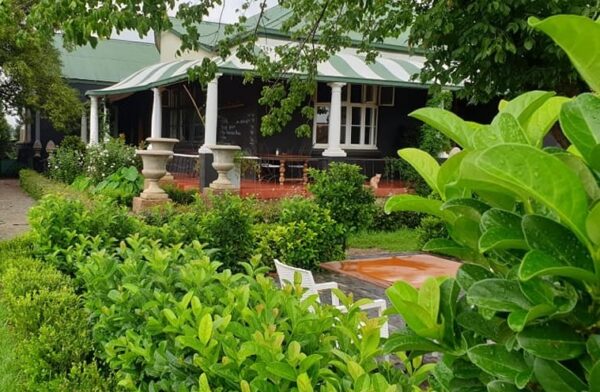 A far cry from the lost building it was in the 1980s, the Old Grimbeekhuis today is set in a lush garden. Photo: Facebook

The house kept on haunting me and in 1993 I had the opportunity to write an article for the Potchefstroom Herald on the house and the Grimbeek family associated with it. Seen against the erstwhile dilapidated state of the house, it had a monumental history as I wrote in my article of 1993:

The farm Elandsheuwel had always been associated with the Grimbeeks, but in the last decades of the 19th century Wilgeboom, Hartebeesfontein, Enselspruit, Nooitgedacht and Rietfontein were also in their possession.

The patriarch of the Grimbeeks in South Africa was Edzard Aldolph Grimbeek from Waasberg in Sweden. He was a ship doctor and later had a large medical practice in Strand Street in Cape Town.

He married Johanna Alida Alleman in 1787 and their grandson, Edzard Johan, was the patriarch of the Grimbeeks of Potchefstroom.

According to Mr Luttig Grimbeek, his great grandson, he came to Potchefstroom shortly after the first Voortrekkers arrived here. He farmed at Oudedorp, but suffered large losses to his livestock, due to the so-called “lung disease” that his animals contracted in the marshy areas.

It appeared that he only later decided to make Potchefstroom his permanent home. In 1857 he started out from the Cape Colony with 4 wagons, 1 300 sheep and some cattle and horses. Their biggest challenge during the journey was not to be trampled by large herds of fleeing and migrating game.

Such migrating game was a common sight, especially during times of drought and with the changing of the season. Such a herd of migrating game overtook them near Bloemhof. It lasted five to six hours to pass and 800 sheep, five horses and a part of the cattle were swept away by the migrating game. They chased after them with horses and managed to save the horses and some of the sheep.

At Potchefstroom he bought Elandsheuwel and added about 6 000 morgen to it.

Including his other farms he owned a whopping 50 000 morgen!

Shortly afterwards he had an impressive house built at Elandsheuwel. Above the front door was a stone lintel with the date 1862 carved into it. The building material for the house was transported by ox-wagon from Pietermaritzburg and it took his son six months to complete the journey.

At the same time they brought the pulpit along for the Hervormde Church, which is still in use today.

This older house was demolished some time ago, but some of the building material was donated to the Potchefstroom Museum. (This is not the house we now know as Old Grimbeekhuis, but a previous one which also stood on Elandsheuwel.)

The Grimbeeks were well-known as transport-riders. It is said that Edzard Johan Adolph (the son of EJ) undertook at least one trip northwards per month. He trekked with several wagons and assembled skins, elephant teeth, horns, sjamboks, thongs and cattle. This was bartered in Cape Town for new wagons, liquor, furniture, guns and ammunition.

Apparently Edzard Johan shot the last lion in the Potchefstroom-area. According to Mr Luttig Grimbeek it took place about ten kilometres outside Potchefstroom on the Johannesburg road. His father often pointed out the place to them.

The last cheetah in the area was also killed by EJ. They chased the cheetah on horseback until he lied down on his back and growled because his paws were worn through.

Edzard Johan Grimbeek passed away in 1874, only twelve years after he built the older house at Elandsheuwel.

Edzard Johan Adolph and his four sons all joined the Boer commandos during the war. His wife and daughter Anna were in the Merebank concentration camp in Natal.

Two sons were “bittereinders” (a term for Boer fighter who “bitterly” resisted till the end of the War) and two were taken as prisoners of war. The father of Mr Luttig Grimbeek, Piet, was in the Deadwood camp on St Helena and his brother was sent to Ceylon (Sri Lanka).

Romance resulted in the house

I then learned that the house we now know as “Old Grimbeekhuis” was, although it was built on Grimbeek land, not really a “Grimbeek house”.

The story related by the late Mr Luttig Grimbeek was one that would set any romantic’s heart aflutter:

The house was built by John Perrin. He was the oldest son of a noble English family and came to South Africa as an English soldier during the Anglo-Boer War. He met Anna Grimbeek, a daughter of EJA and fell in love with her.

Despite fierce resistance of family members they married and he had the house built for her. He had a successful business and apparently was one of the first people in Potchefstroom who owned a motor vehicle, a bath on feet, a radio, a pianola and a telephone.

In 1928 the couple purchased another house that also still stands at 76 Lombard Street (James Moroka), currently a Provincial Heritage site. Anna passed away exactly a month after John on 8 February 1939.

When I visited the “Grimbeek” house in 1993, a family lived in the house, but kept horses on the land around it. The house was much cleaner and rid of the mice, but the occupants’ focus was on the horses and nothing was maintained in the house. The gable was still leaning. 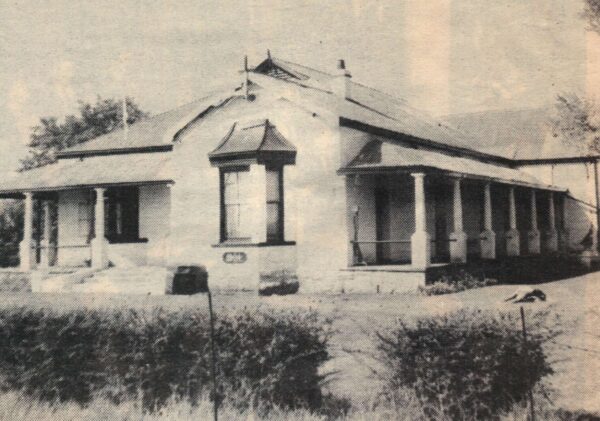 The Grimbeekhuis, as it looked in 1994. During the 1980s it was used as a seed store. The photo accompanied an article I wrote for the Potchefstroom Herald at the time.

To the delight of all heritage buffs, the building was saved not long afterwards. Then, as now, developers were circling like so many hyenas, salivating by the prospect to demolish the house and turn the land into another faceless townhouse complex. Mrs Hetta van der Merwe and her brother, Dr Andries Oberholzer, bought the house, had it renovated and turned it into the Dippe Dap Nursery School. The house of a childless couple was now a nursery school.

It later became a coffee shop and guest house and but was surrounded by much controversy. In 2013 when I visited the house to take pictures, I was chased away by the occupants. 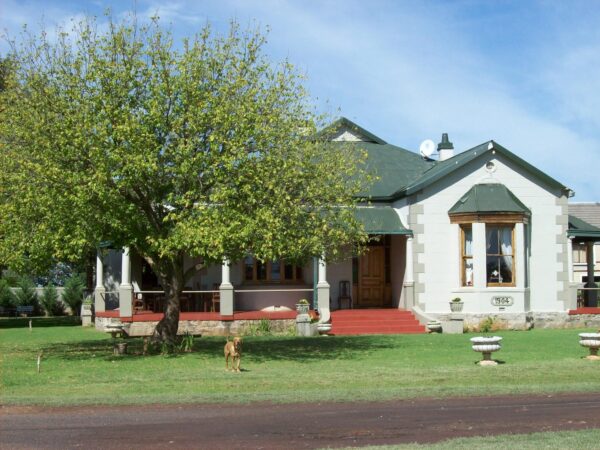 And then came André Jacobs, of whom his name would make you think he is a Boerseun, but he hails from the Netherlands, an affable man with a delicate accent and a full sleeve of tattoos.

André and his wife Zoë acquired the house in 2017. He had a business as a florist in Parys, with many clients in Potchefstroom. They adopted two sons with learning disabilities and found the perfect school for them here. “Potchefstroom just made more sense,” says André. 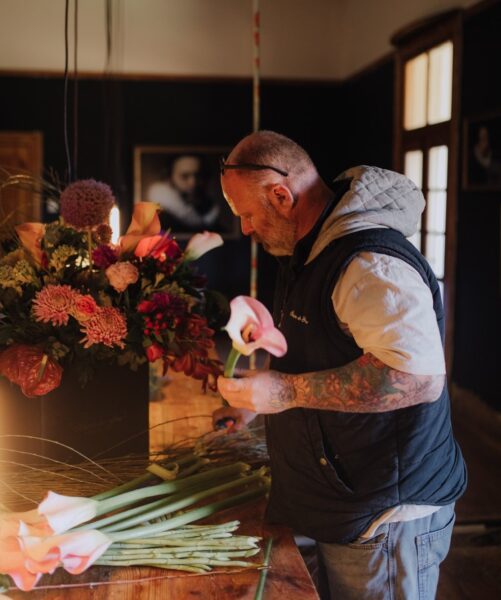 After viewing property after property, the estate agent brought the couple to the old Grimbeekhuis as a last resort. “Because of the history the place holds, we found it only fitting,” he says.

And then came Old Grimbeekhuis

André describes his vision for the business:

The aim of the business is to pay tribute to its heritage and to do that with our food and the services we offer being an events venue as well. We want to create a niche and brand where it is instantly recognisable as Old Grimbeekhuis. Therefore we only serve Belgian beers in our bar and always add at least one new dish to our menu every month. This is also a family business, for our sons and their future and not just a restaurant.

André explains what visitors to Old Grimbeekhuis can expect:

The restaurant dining area is an intimate setting where we only play classical music and we serve rustic meals of generous proportions.

The bar is an entirely separate building where it is more laid back and music from the 1970s, 1980s and 1990s genre is played. We also serve lighter meals there and the bar area is also the smoking section.

The cigar lounge is a private space altogether and exclusively for members only. It is a gentleman’s club, to enjoy expensive Cuban and other cigars and top of the range, exclusive whiskeys, bourbons brandies and cognacs.

André and his wife has transformed the old forlorn house, which stood on a plot devoid of any greenery, with only a few struggling trees, to an Eden. Neatly clipped boxed hedges next to garden paths, bubbling fountains and wrought iron gates would surely receive a nod from the first occupants of the house, the Perrins. 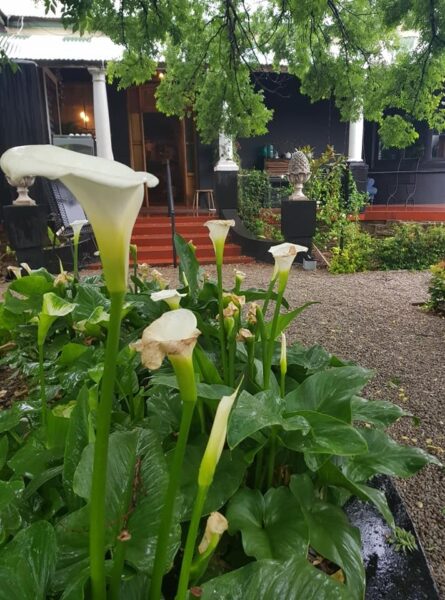 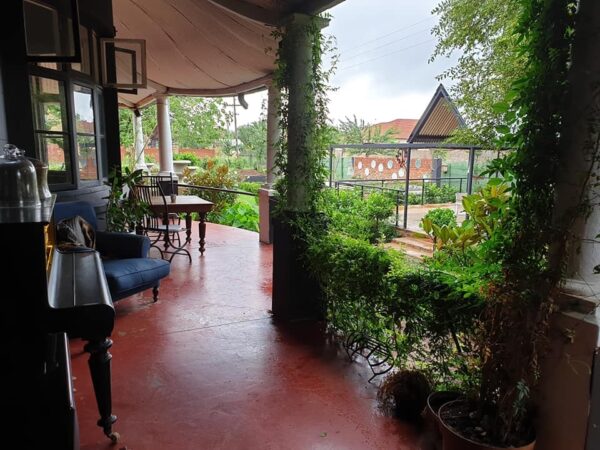 A treasure on our doorstep

Comments on social media about the Old Grimbeekhuis speak for themselves with Tripadvisor giving Grimbeekhuis five stars.

A reviewer on Tripadvisor wrote:

Here’s a hidden treasure on our doorstep – where service with a smile, delectable dishes, exquisite interior and smooth jazz to soothe your soul all combine to provide ambient, memorable experiences! With a personal, down-to-earth touch, the owner and staff of Old Grimbeek house made our book club evening a night to remember. So come tantalize your taste buds, sip on one of the many Belgian beers to choose from, relax and soak in the beauty this place has to offer…it’s just around the corner!

I will definitely recommend the Old Grimbeekhuis in Potchefstroom. This is a hidden jewel right in our midst.

If you are looking for a place to take your wife or friends for some fine dining, this is definitely your go to.

This place is worth traveling to just for the ambiance, setting, food and meeting Andre the owner.

The transformation of Old Grimbeekhuis into a destination with a difference is by no means complete. André still has many plans to develop the rest of the property.

Old Grimbeekhuis has the exquisite and tranquil atmosphere only to be expected in the most exclusive dining venues on offer in large cities. But as a reviewer said: “It is just on our doorstep.”

To me André is one of the heroes of Potchefstroom, not just for his fine restaurant, but he is one of only a few local businessmen who made an effort to save an architectural gem of Potchefstroom for posterity. The city last year lost three of its heritage buildings, all due to different circumstances. To see this house thriving, being the setting where fine food can be enjoyed, where people can come to unwind, creates a warm fuzzy feeling in my heart.

Perhaps I played some part in the saving of the house, by drawing the right attention to it in my initial articles in the 1990s. I truly hope that this article will contribute to keeping this treasure for future generations living in Potchefstroom.