One day, in an attempt to prevent the wrong parties from finding out that he was printing bank notes, he sat on the printing press, which left a perfect impression of the banknote on his light coloured trousers.

He played a vital role during the Siege of Potchefstroom (16 December 1880 to 21 March 1881). After the meeting at Paardekraal in December 1880, where it was decided that the Boers north of the Vaal River will claim their independence from the British, General Piet Cronje and 400 men were sent to Potchefstroom to have their independence declaration printed at his printing works. 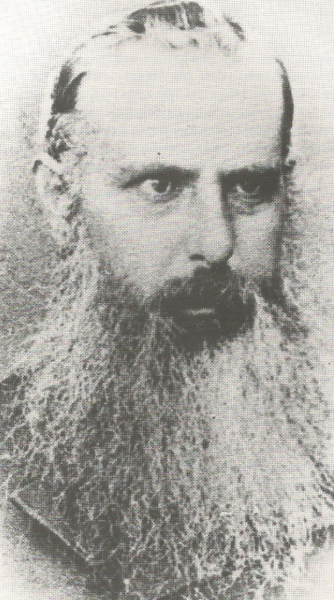 Johannes Philippus (Jan) Borrius (1840-1892) was the first government printer of the ZAR and played a leading role in the printing and press history of Potchefstroom. Photo: Potchefstroom Museum

The heading of a family photograph of the Borrius family, in the Potchefstroom Museum, declares that his family was in the printing business in Potchefstroom from 1859 to 1899.

JP Borrius was born in Amsterdam in the Netherlands on 23 May 1840 and was trained as a printer. He came to South Africa in 1860. He worked for a publication Het Volksblad (not to be confused with De Volksblad which was first published in Bloemfontein in 1915 and still appears) in Cape Town for a few months.

He then worked for a paper in Swellendam, but due to its pro-British sentiment left to end up in Graaff-Reinet. Shortly after his arrival there he joined a group of Trekkers under a certain Oberholzer to go to the Transvaal. On their way, in Winburg in the Orange Free State, he met his later wife. He married Nicolasina Susanna de Beer on 20 January 1863.

Citizen of the ZAR

By 1861 Borrius was in Potchefstroom. According to the Government Gazette of 3 May 1861 he became a citizen of the ZAR, after paying 100 rixdollars (riksdaalders). He was employed by Herman Jeppe to help publish De Oude Emigrant and De Gouvernments Courant.

Jeppe left in a hurry after clashes with the government and the printing works were left neglected.

Magistrate Steyn appointed CP Moll and Borrius to rectify the bad state of the printing works, a task he finished on 10 February 1862. He was then appointed as government printer to the ZAR on 8 April 1862.

One of his tasks was to publish a newspaper and two months later, on 24 June 1862, Borrius published his first newspaper, De Emigrant. The printing press was situated in a building in Berg Street (Peter Mokaba) on premises he rented.

Only sixteen editions of this newspaper saw the light and it was discontinued due to the Civil War. Stephanus Schoeman wanted to involve Borrius in his quarrel with Paul Kruger, which Borrius resisted and Schoeman confiscated his printing press. Schoeman wanted Borrius to move the printing works to Pretoria, which he did not want to do, hence the confiscation and in July 1863 the press was taken to Pretoria.

Before this happened the printing works were moved to Church Street (Walter Sisulu). Borrius demanded that the press be handed back to him, since his contract with the government was still legal until 8 April 1864.

This was a woeful time for Borrius. Although he was still under contract from the government, he was not paid. He and his young family was forced to move in with his mother-in-law and Borrius became a teacher, employed by Mr Edzard Grimbeek at £3 per month.

In 1866 he used an inheritance of his wife to buy a property in Berg Street. This was mortgaged to OWA Forssman to obtain an Albion Printing Press, which was imported from Sweden.

The Albion Printing Press was designed by Richard Whittaker Cope in 1820 and was made in London. It used the same basic printing process first designed by Johannes Gutenberg, based on the workings of a winepress. One side of one page is printed at a time and it was possible to print between 400 and 500 pages per day. Borrius used this press until his death in 1892. See an Albion Printing Press in operation. 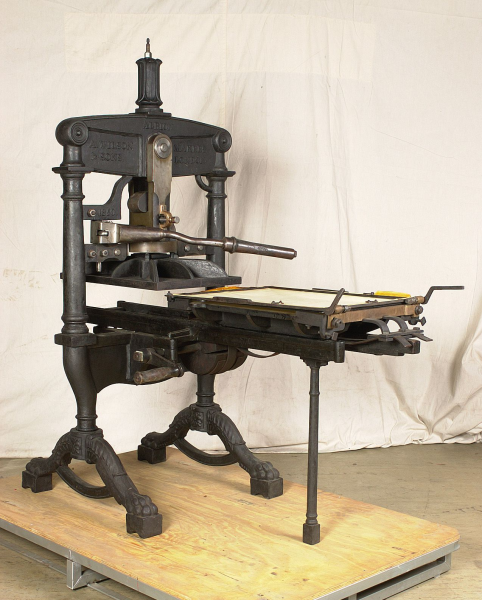 With the Albion Borrius was able to publish the Transvaal Argus. He appointed a certain Van Alphen as printer. In this newspaper appeared the earliest written examples of Afrikaans, written by Berend Moddermannetjie.

In July 1867 JH Roselt took over the newspaper and in May 1869 changed the name to The Transvaal Advocate. Legal steps were taken against Roselt due to his anti-government criticism and in September 1869 his association with the newspaper was severed.

Apart from the newspaper Borrius still took on commissions from the ZAR government. On 6 May 1866 Borrius was contracted to print paper money, worth £12 000, in total 49 000 notes.

This commission was given in secret due to differences of opinion in the Volksraad in Pretoria.

One Wednesday afternoon Borrius was visited by General Lukas Meyer, leader of the opposition in the Volksraad, who did not know about the commission. Borrius innocently sat on the printing plate to hide it from Meyer and went home that night with a perfectly printed bank note on his light coloured pants.

Between 1870 and 1873 Borrius also printed postage stamps. It is well-known that he had trouble in obtaining the correct ink and paper. With the exception of one small impression, all his stamps were rouletted (with perforated edges) to make tearing he stamp off more easy. 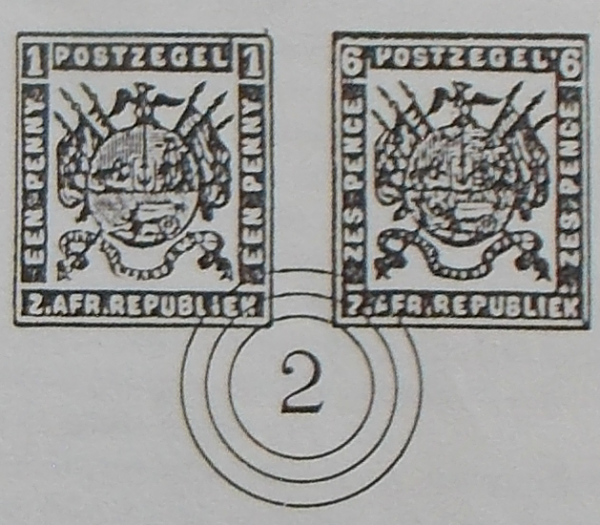 Some of the postage stamps, first printed by Borrius, were used on the commemorative envelope, published by the South African Philatelic Services in 1988, when Potchefstroom celebrated the 150th year of its existence.

From 1871 to 1874 he published the bilingual Transvaal Advocate and Commercial Advertiser with R Rutherford as co-owner and editor.

During the middle of the 1870s he was dependent on government contracts, but after the annexation of the Transvaal by England on 12 April 1877, this source of income dried up. However, the discovery of diamonds at Kimberley and gold on the Witwatersrand caused an economic boom time, presenting new sources of income for Borrius. 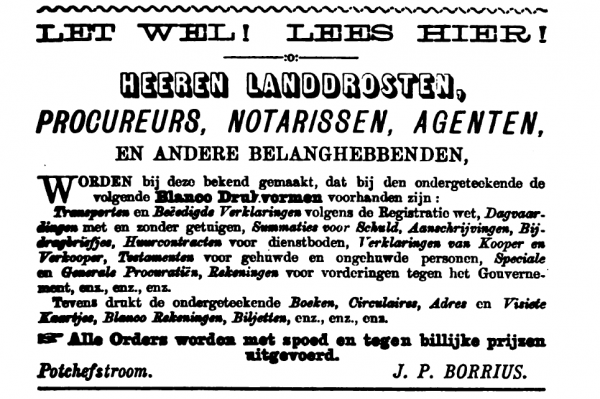 The advertisement of JP Borrius in the Transvaal Almanac of 1877, published by Fred Jeppe.

He again turned to journalism in 1877 with the launch of De Transvaal, with Borrius as printer, owner and editor. The paper, in Dutch, took a strong standpoint against the British rulers. He stayed a strong Boer supporter during the First Anglo-Boer War (1880-1881), which caused the downfall of the newspaper, since most of his advertisers were English or supported the British cause and withdrew their support for the paper.

Borrius was heavily disappointed, but refused to have his printing press used by the English rulers to help calm down the revolting Boers.

In spite of warnings by the British rulers not to support the Boer cause, Borrius started to print the Freedom Proclamation on the 15 December 1880 and worked through the night to do so.

After the war he again printed the Gouvernements Courant until the commission to do so was given to printers in Pretoria.

Borrius’s last contribution to the history of the press in Potchefstroom, was De Potchefstroomer which appeared for the first time on 28 February 1883. It was initially sent to all the subscribers of the earlier De Transvaal. The paper was well received, but recipients refused to pay for the paper and he was forced to change the format of the paper to a smaller size to make it financially viable.

Although his purpose with this publication was not to give political commentary, he sometimes weighed in on political themes.

In May 1883 he championed the establishment of a town council for Potchefstroom to make the management of the town more sufficient.

With the discovery of gold on the Witwatersrand, he encouraged farmers to expand their farming interests so as to “mine gold out of the purses of the gold miners”.

Later the paper received government support of £50 per month for the printing of publications to be distributed in Potchefstroom. From 1892 the local printing industry was supported by an import duty of 100% on all printed matter.

JP Borrius died on 3 September 1892 after receiving news of the bankruptcy of the Potchefstroom Gold Exchange, during which he suffered large financial losses. He was also informed that his attempts to salvage some of his losses by a legal process was unsuccessful and allegedly, on purpose, drank carbolic acid and passed away. His wife survived him with more than 26 years and passed away in January 1919 at the age of 74 years. 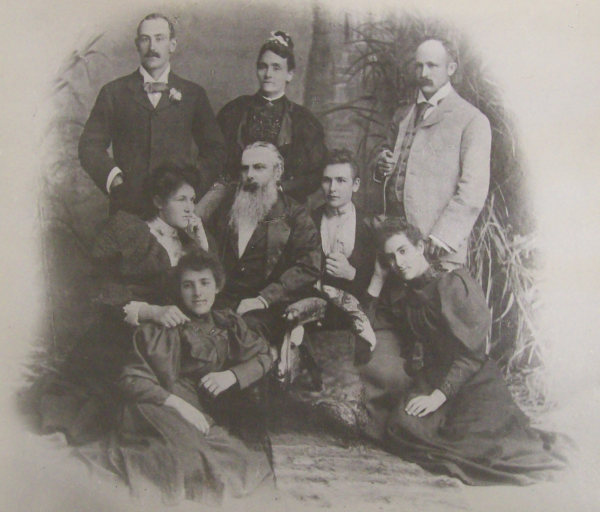 The heading of this photograph, in possession of the archives of the Potchefstroom Museum, proclaims the Borrius family as the first permanent printers in the Transvaal, 1859-1899. At the back is Albert Scholten, Mrs Susanna Borrius, wife of Jan Borrius, and Jack Borrius, his eldest son. In the middle is Marie Baker, Johannes Philippus Borrius, Susan Bischoff. In front is Wimpie van der Korst (or Kast) and Kobie Malan.

It is unclear how long his paper survived after his death. An edition from 1896 is still in existence and it is known that his printing business was in operation till about three years after the Second Anglo-Boer War (1899-1902). The business was conducted by Mrs Susan Bischoff, daughter of Jan Borrius.

Another daughter, Kobie, also had a link with the press history of Potchefstroom. She was the wife of Charles Malan, the first editor of another newspaper published in Potchefstroom, De Westelike Stem. Charles Malan was the uncle of the well-known South African author, Herman Charles Bosman, who was named after his uncle Charles.

Borrius’s son, also JP, but known as Jack, have had a colourful life and a future article will be dedicated to him.

During the long years Jan Borrius resided in Potchefstroom he had the interests of the town at heart. He endeavoured to have Potchefstroom appointed as the assembly point to gather a selection of local produce to send to international shows in London and Paris and agitated for the forming of a town council to make the managing of the town more efficient. Against the warnings of the British rulers, Borrius printed the Freedom Proclamation.

Prof Gert Pienaar, first lecturer in Press Science at the Potchefstroom University, regarded Jan Borrius as one of four people to have played a leading role in the press history of Potchefstroom.